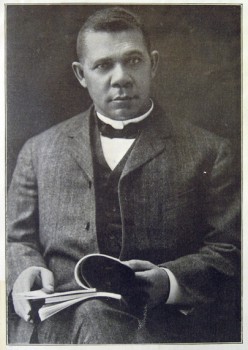 In the 1900s, Dr. Booker T. Washington, world reknowned educator and founder of the Tuskegee Institute, knew that early education was needed for children of color.

Due to Booker T’s personal sojourn, determination and passion for education, a vision was born and a destiny was put into play. Dr. Washington and Mr. Julius Rosenwald, president of Sears and Roebuck, would meet, connect and take a stand for children of color.

Mr. Rosenwald already had an interest in supporting a wide range of charitable causes for Negro people. However, after reading Dr. Washington’s book Up From Slavery, Mr. Rosenwald’s chief concern became “Education for Negro children in the South.” Rosenwald was motivated to work with Washington based on his belief in the value of education, combined with hard work and self-reliance, as the foundation for personal success.

Washington shared Rosenwald’s vision about the transformative power of education. Together they created the Rosenwald School Fund, which had its beginnings on the campus of Tuskegee Institute.

On the occasion of Mr. Rosenwald’s fiftieth birthday, he presented Dr. Washington with $25,000 to aid black colleges and preparatory academies. Dr. Washington asked that a small amount be used as grants to build elementary schools in rural areas near Tuskegee. Mr. Rosenwald accepted with the stipulation that each community had to raise funds to match the gift of the grant.

The first Rosenwald school was built in Alabama and dedicated in 1913. In 1915, at the age of 59, Dr. Booker T. Washington made his passage from this life. By this time, some 80 schools in three states had matched the gift of the grant. In 1917, in order for Dr. Washington’s vision to continue, Mr. Rosenwald established the Julius Rosenwald Fund.

Booker Taliaferro Washington was born into slavery in Franklin County, Virginia, on April 5, 1856. In spite of the fact that it was illegal to teach enslaved blacks to read and write, Washington was able to obtain a primary education, and subsequently entered Hampton Institute in the fall of 1872. He proved to be an exemplary student, and over the years, an equally respectable teacher and speaker.

The principal of Hampton Institute recommended Washington to a group of Alabama legislators as a viable candidate for director of an African American school they wanted to establish. In 1881, Washington became president of that school, known as Tuskegee Institute.

Primarily a training ground for teachers, Tuskegee’s program provided students with academic and vocational training. As a result of Washington’s work as an educator and public speaker, he became the most prominent African American leader in the United States between 1895-1915.

On Sunday, October 2, 2022, the Rosenwald Collaborative and Mars... END_OF_DOCUMENT_TOKEN_TO_BE_REPLACED

Take a trip to the 1920s when Rosenwald Schools were... END_OF_DOCUMENT_TOKEN_TO_BE_REPLACED