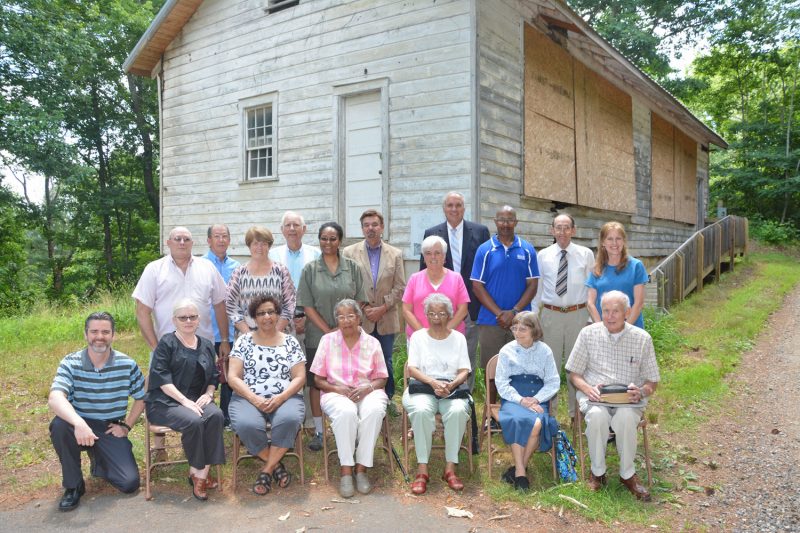 Friends of the Mars Hill Rosenwald School began meeting in the fall of 2009 and organized the Planning Committee to save the school building.

Steward Coates was elected as leader of the group, and committees were appointed: Building, Grants, History, and Publicity.

Margaret Newbold, Associate Director of Diversity, Conservation Trust of North Carolina from Raleigh met with the Friends Group. Her grandfather, Nathan Carter Newbold, was Director of the NC Division of Negro Education with the NC Department of Public Instruction. Viola King Barnett’s letter may have gone to Director Newbold. Barry Williams, Diversity Project Coordinator also met with the Planning Committee. During 2010, monies were secured from Conservation Trust of North Carolina and Madison County School Board to place a new roof on the building.

The first public gathering, celebrating the Long Ridge Community and the Rosenwald building rehabilitation took place in October 2010 as part of the Mars Hill College Founders Week, celebrating Joe Anderson, for whom the Anderson Elementary School was named.

Also during 2010, Willa Wyatt was elected chair of the Planning Committee, as she and husband David Wyatt had been members since the beginning. Architect Scott Donald, Padgett & Freeman Architects, rendered the drawings for the rehabilitation of the historic school building, meeting preservation standards for historic preservation, as the Mars Hill Rosenwald School building was placed on the State Study List for possible listing in the National Register of Historic Places. Long Ridge neighbor Simone Bouyer, Ad World Services, is webmaster for the Friends Group, and Theresa and Ryan Phillips, Legacy Films, Ltd., are media specialist, and Fatima Shabazz is chairwoman of the Alumni Committee.

In 2011, students from Elon University filmed interviews of alumni and friends of the school for an eight minute video on the Rosenwald School, now posted on the web site. Also, Mars Hill University students from Lifeworks and Bonner Scholars Program have rendered community service for the school project. In fact, they received the National Award for the best photograph during the National Martin Luther King Day of Service in 2012, for their work on the Rosenwald school property.

The Friends of the Mars Hill Rosenwald School have completed the Strategic Plan with the leadership of Judy Futch and Paul Smith, Judy Futch Consulting, Inc., and are in the process of Incorporation as a 501 (C) (3) non-profit.

On Sunday, October 2, 2022, the Rosenwald Collaborative and Mars... END_OF_DOCUMENT_TOKEN_TO_BE_REPLACED

Madison County Board of Education Minutes of July 2, 1956... END_OF_DOCUMENT_TOKEN_TO_BE_REPLACED

This history script is for MHARS Friends Group Review1 1856... END_OF_DOCUMENT_TOKEN_TO_BE_REPLACED