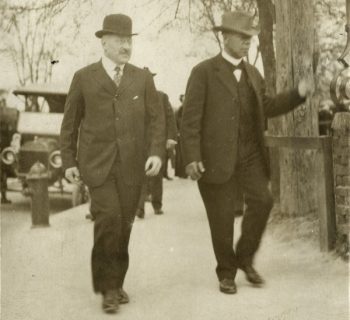 In 1912 Booker T. Washington, prominent educator and proponent of the power of self-help, approached Julius Rosenwald, president of Sears, Roebuck, and Co., with his idea of building schools for African-American children in the rural South.

Rosenwald had already demonstrated his interest in supporting building programs by offering matching grants for construction of African-American Y.M.C.A’s.

With Washington’s encouragement he made matching grants of $25,000 to Tuskegee as an African-American teacher-training institution and of $300 to each of six rural schools in Alabama. In 1914 Rosenwald made an additional gift of $30,000 toward construction of 100 rural schools. Two years later he provided for up to 200 schools to apply for matching grants of $300 each.

Both Washington and Rosenwald insisted upon local contributions of cash, materials, and labor rather than full public or philanthropic funding. Long Ridge School and Mt. Olive Baptist Church in Madison County, North Carolina, had already manifested such commitment to community and to the education of their children. In 1925 they updated an older school for $300 plus $250 for desks, and approximately $100 for labor and materials. The building was still inadequate, but the members of the Long Ridge community had started a tradition of community support in addressing special needs.

In the spring of 1927 the Board of Education purchased an additional acre of land from J. M. Rice, and by July 1928 the community had raised approximately $600 toward construction of a new building on Long Ridge. In correspondence with the Director of Rosenwald funds, the newly elected Superintendent, C. M. Blankenship, explained that Rosenwald Architectural Plan No. 20 had been used for the new school, which cost $2,093, except that the Industrial Room had been omitted. “Can we still get Rosenwald Funds,” he asked.

In response Rosenwald monies for $750 came in the summer of 1929, and that fall the first class was taught in the African-American school which is known as the Mars Hill Anderson Rosenwald School. That amount could not have been matched without the efforts of members of the Long Ridge Community who contributed cash, in-kind labor and materials, wrote to the Superintendent of N.C. Schools, and lobbied the county school board and Board of Commissioners.

On Sunday, October 2, 2022, the Rosenwald Collaborative and Mars... END_OF_DOCUMENT_TOKEN_TO_BE_REPLACED

Take a trip to the 1920s when Rosenwald Schools were... END_OF_DOCUMENT_TOKEN_TO_BE_REPLACED