On May 31, 2018 the Mars Hill Anderson Rosenwald School was listed on the National Register of Historic Places. The school is listed as the Mars Hill School, MD0253.

The school stands on the east side of Mount Olive Drive, a dead end road, approximately one-quarter of a mile south of the inter section with Long Ridge Road. Located at the southwest corner of an irregularly shaped 0.77-acre parcel, the building is immediately adjacent to Mount Olive Drive, which is paved at the north end, but becomes a gravel road west and south of the school.

This part of the county is heavily wooded with small tracts cleared for residences and churches, including along Mount Olive Drive with a residential property just north of the school. The school site is in the southwest corner of a heavily wooded lot and surrounded by mature trees. The site has been cleared of trees only in the area immediately surrounding the school and to create a small paved parking area north of the school. In addition to being wooded, the site slopes down significantly to the east, just beyond the school, reinforcing the physical isolation of the school. The change in grade also results in greater exposure of the foundation on the north and east elevations. 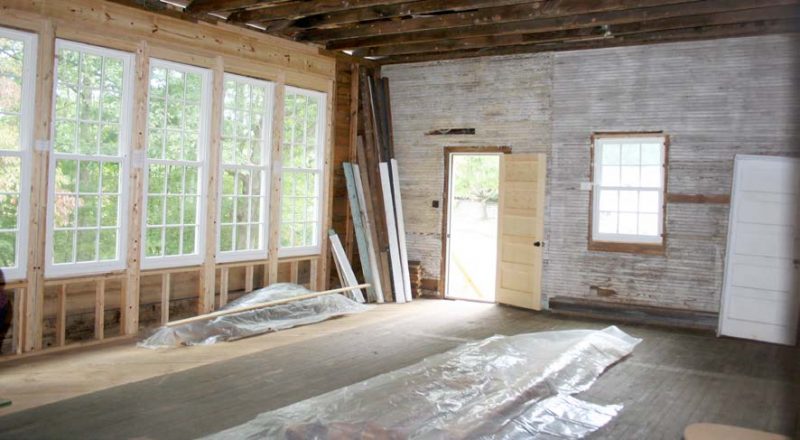 Mars Hill School was constructed as a two-room, frame Rosenwald school, built in 1928 following a local modification of Floor Plan No. 20 for a “Two Teacher Community School to Face East or West Only” from the Rosenwald Fund’s Community Schools Plans, Bulletin No. 3. The school plan was rotated 180 degrees with the two classrooms arranged end-to-end to form the main block of the building on the west side, their windows facing the road, and the projecting cloakrooms built on the rear (east) elevation. The moveable partition between the classrooms was removed in the 1970s to create a single open space.

In lieu of the standard industrial room flanked by entrance vestibules and cloakrooms prescribed by Floor Plan No 20, the north and south classrooms were accessed via doors on the north and west elevations respectively. On the east elevation, a single door from each classroom opened to what appears to have been an open porch flanked by cloakrooms, constructed soon after the school was built, all several steps below the floor level of the classrooms and sheltered by a continuous shed roof.

Mars Hill School meets National Register Criterion A at the local level for Education and African American Ethnic Heritage. It is significant for its association with African American education in Madison County from 1928 until 1965. It was the only school in the county financed and constructed with the assistance of the Rosenwald Fund, and one of only two Rosenwald Schools known to be extant in the westernmost counties of North Carolina.

Mars Hill School served elementary school students in grades one through eight in Mars Hill, Marshall, and parts of Yancey County to the east. The period of significance extend from 1928, when the school was constructed, to 1965, when the school was closed due to desegregation and students were integrated to other schools in Madison County.

It is a modified example of Floor Plan No. 20 from Samuel L. Smith’s Community School Plan, Bulletin No. 3. Despite alterations and a loss of material integrity largely due to changed use and deterioration, the school retains distinctive characteristics of the two-teacher school plan and building form.

Specifically, the school was built between 1915 and 1932 utilizing funds provided by the Julius Rosenwald Fund and retains its original location in a rural setting. The school retains its distinctive architecture through its side gabled form, original frame construction and weatherboard cladding, and replacement nine-over-nine windows similar to the original windows.

On Sunday, October 2, 2022, the Rosenwald Collaborative and Mars... END_OF_DOCUMENT_TOKEN_TO_BE_REPLACED

This history script is for MHARS Friends Group Review1 1856... END_OF_DOCUMENT_TOKEN_TO_BE_REPLACED