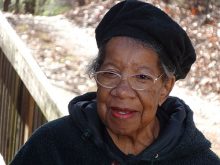 Five students from the Long Ridge School and community are given as examples of academic achievement and cultural contributions, still living today, from second to sixth school generations.

Charity Ray, retired from Mars Hill University School of Education and Library, is a local artist. Her water colors have been purchased by individuals from many states, and her renderings of the Mt. Olive Baptist Church building and the Mars Hill Rosenwald School building are published by the Friends Group. Her love for art began when she was allowed to sit-in the Long Ridge School at age five, where she began her first drawings. This was before the days of kindergarten. She continued her art work at Allen High School for African-American girls in Asheville, where she graduated. Today she is a member of a Mars Hill arts group, The Church Mice. Also she is a member of the History Committee of the Rosenwald Building Rehabilitation Project. Thank you Rockefeller Room, her parents, and her teachers at Rosenwald Elementary and Allen High Schools, who encouraged her. 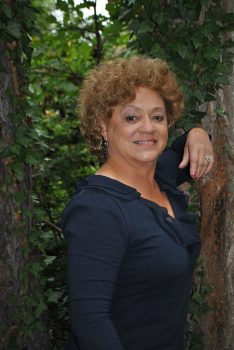 Oralene Simmons attended the Long Ridge School in the Rosenwald building, and graduated from Stephens-Lee High School in Asheville, NC. She was the first African-American admitted to Mars Hill College in 1961,[xxvii] one of the first admissions in the South, two years before Martin Luther King’s famous speech, “I Have A Dream!” She is the great great granddaughter of Joseph Anderson. Her grandmother, Effie Anderson Coone, granddaughter of Joe Anderson, taught at the Mars Hill Colored School in 1901.[xxviii] Oralene became a leader in Asheville during the integration protest years, later becoming Director of the YMI Cultural Center. She organized the Martin Luther King Prayer Breakfast in Asheville, the largest in the Southeast. Today, she continues her leadership in cultural diversity activities. She is a member of the Friends of the Mars Hill Rosenwald School Rehabilitation Project.

Dr. David Lloyd Briscoe grew up in the Long Ridge Community, and attended the Long Ridge School. Also, he was a member of Boy Scout Troop 85 that met at the school. After receiving his Ph.D. in Sociology from Southern Illinois University at Carbondale, he became a tenured, full Professor of Sociology at the University of Arkansas at Little Rock. He is U.S. Fulbright Scholar’s Program Representative, a Graduate School Faculty Member, a Distinguished Teaching Fellow in the Department of Sociology and Anthropology, and coauthor of one book and author of four more. He serves on the Boy Scouts of America National Executive Board, and is a recipient of the Silver Buffalo Award, the highest award in the Boy Scouts of America for distinguished service to youth on a national level. He is the first Board of Advisors member with the Mars Hill Rosenwald School’s Friends Group.

Charlene Ray, great, great, great granddaughter of Joseph Anderson, graduated from Mars Hill College in 1982 with honors. She was the first Appalachian Scholar at the school, receiving a full scholarship. For her senior research project, she researched and wrote, “History of Blacks in Madison County.”[xxix] After receiving her Masters Degree at ETSU, Mrs. Dunn became a staff member at the Environmental Protection Agency in Washington, D.C.

Kevin Barnette, grandson of Viola King Barnett, graduated from Mars Hill College in 1985, having been one of the school’s star football players. He achieved his Masters Degree from the U.S. Sports Academy at Daphne, Alabama. Kevin returned to his Alma Mater as Assistant Football Coach, where he works today. He serves as Deacon in his Baptist Church in Asheville, NC. At Mars Hill, he helped organized the Fellowship of Christian Athletes at the school, one of the largest in the South. He, also, is a member of the Rosenwald Friends Group, serving as chair of Community Relations Committee.

Due to the weather and the growing COVID numbers and... END_OF_DOCUMENT_TOKEN_TO_BE_REPLACED

Together we are on a mission, a mission to sustain... END_OF_DOCUMENT_TOKEN_TO_BE_REPLACED

This history script is for MHARS Friends Group Review1 1856... END_OF_DOCUMENT_TOKEN_TO_BE_REPLACED