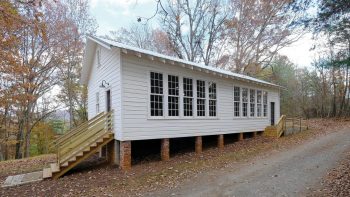 In the fall of 2009 the Friends Group of the Mars Hill Anderson Rosenwald School began meeting to save the school building. After more than a decade of dedicated hard work and perseverance, the school building has now been rehabilitated.1

The Friends of the Mars Hill Anderson Rosenwald School are available for interviews and presentations. Visitors are invited to contact us to tour the school.

The Mars Hill Anderson Rosenwald School will serve as a Cultural Center intended to promote a fuller understanding of rural Black history in the Southern Appalachian Highlands and to enhance education at all levels.2 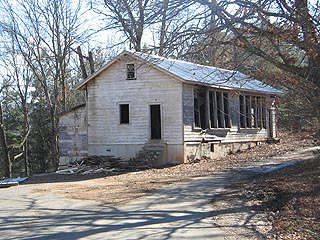 The Mars Hill Rosenwald School in 2010.

The public records show that Madison County, NC operated free public schools for Blacks beginning with the first in 1874. By 1905, Black schools were operated throughout Madison County at Marshall, Hot Springs, Little Pine, Mars Hill, Bull Creek, and Ivy. After the Rosenwald School was established in 1928, Black students throughout the county attended the school at Long Ridge until the schools were integrated in 1964.3

The Notated History of the school, Our Story, This Place, has been prepared by the Friends Group History Committee, established at the first meeting in 2009. The committee consisted of Richard Dillingham, Chair; (Charity Ray, and her sister Dorothy Coone; Edwin Cheek; Pauline Cheek, all four now deceased), and later, Dan Slagle, then, Sarah Hart. The Ray sisters and Sarah Hart attended the Rosenwald School.4

The name for the MHARS has evolved over the years. Madison County Board of Education Minutes listed the name in 1905 as “Mars Hill Colored School;” in 1928 Fisk University listed the name as “Mars Hill School;” in 1939 Madison County Board of Education Minutes Minutes listed it as the “Long Ridge Colored School,” and in 1959 suggested that the Long Ridge Community come up with a better name, which they later chose as the “Mars Hill Anderson Elementary School.”5 The school was not called a Rosenwald School until the Friends Group published it in their Strategic Plan in 2013, as Jewish benefactor, Julias Rosenwald, because of his faith, chose not to allow his name to be used. The name Mars Hill Anderson Rosenwald School was published in its notated history Our Story, This Place in 2019.6

Students from this school have attracted both state and national attention, see historical moments.

On Sunday, October 2, 2022, the Rosenwald Collaborative and Mars... END_OF_DOCUMENT_TOKEN_TO_BE_REPLACED

This history script is for MHARS Friends Group Review1 1856... END_OF_DOCUMENT_TOKEN_TO_BE_REPLACED