Oralene Simmons, who broke the color barrier in the early 1960s, was presented an honorary doctorate. The commencement speaker was Preston Blakely, mayor of Fletcher, North Carolina, and Simmons’s grandson. The commencement took place in Moore Auditorium on Saturday, May 21, 2022.

Oralene Anderson Graves Simmons is a Mars Hill native who has become a well known figure in the Asheville area for her decades of work in the community and in the civil rights arena. Among many other contributions, she founded the Martin Luther King Jr. Prayer Breakfast in Asheville; was executive director of the YMI Cultural Center; and served as the cultural arts supervisor for the City of Asheville. Oralene, who attended Mars Hill College from 1961-1963, was the first African American student to enroll at the institution.

Oralene attended the Long Ridge School in the Rosenwald building, and graduated from Stephens-Lee High School in Asheville, NC. She was the first African American admitted to Mars Hill College in 1961, one of the first admissions in the South, two years before Martin Luther King’s famous speech, “I Have A Dream!” She is the great-great-granddaughter of Joseph Anderson. Her grandmother, Effie Anderson Coone, granddaughter of Joe Anderson, taught at the Mars Hill Colored School in 1901.

Oralene became a leader in Asheville during the integration protest years, later becoming Director of the YMI Cultural Center. She organized the Martin Luther King Prayer Breakfast in Asheville, the largest in the Southeast. Today, she continues her leadership in cultural diversity activities. She is a member of the Friends of the Mars Hill Rosenwald School Rehabilitation Project. 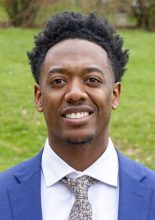 Preston Blakely is in his first term as mayor of the Henderson County town of Fletcher. He grew up in Fletcher, graduated from Asheville High School, and received bachelor’s degrees in political science and African American & African diaspora studies at UNC Greensboro and a master’s in public affairs at Western Carolina University. He was elected to town council in 2019 and won last fall’s mayoral election. At 27 years old, he is Fletcher’s youngest mayor in its 33-year existence, and is its second African American mayor.

Mars Hill University is a premier private, liberal arts institution offering over 30 baccalaureate degrees, as well as master’s degrees in criminal justice, elementary education, teaching, and management. Founded in 1856 by Baptist families of the region, the campus is located just 20 minutes north of Asheville in the mountains of western North Carolina.

On Sunday, October 2, 2022, the Rosenwald Collaborative and Mars... END_OF_DOCUMENT_TOKEN_TO_BE_REPLACED

Madison County Board of Education Minutes of July 2, 1956... END_OF_DOCUMENT_TOKEN_TO_BE_REPLACED

This history script is for MHARS Friends Group Review1 1856... END_OF_DOCUMENT_TOKEN_TO_BE_REPLACED

Take a trip to the 1920s when Rosenwald Schools were... END_OF_DOCUMENT_TOKEN_TO_BE_REPLACED