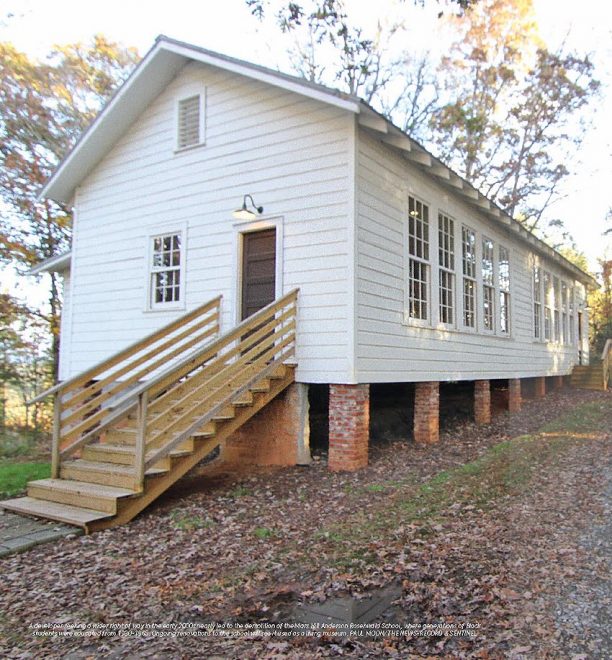 A developer seeking a wider right of way in the early 2000s nearly led to the demolition of the Mars Hill Anderson Rosenwald School, where generations of Black students were educated from 1930-1965. Ongoing renovations to the school will see it used as a living museum. PAUL MOON/THE NEWS-RECORD & SENTINEL

by Chance Thweatt, reprinted with permission of The News-Record & Sentinel –

“We began with one major goal in mind and that is to be entered in the National Register of Historic Places,” said Willa Wyatt, chairman of the Friends of the Mars Hill Anderson Rosenwald School group.

On Apr. 16th, 2021, the Mars Hill Anderson Rosenwald School, located in the Long Ridge Community, received its National Registry plaque. The plaque is a public acknowledgment of all the research, planning, and work that took place prior to being placed in the National Registry on May 31, 2018.

“This is a great honor because of the history and sacrifices that some of the students had to make just to attend the school because of segregation,” Ray Rapp, a member of the Mars Hill Anderson Rosenwald School Rehabilitation Committee, said. 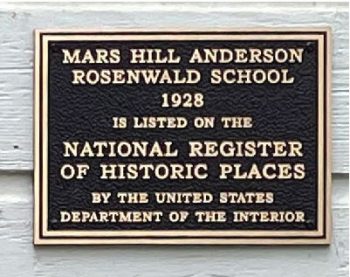 “The plaque is very special because this is the last Rosenwald school in Western Carolina,” Ray Rapp said.

According to the National Trust for Historical Preservation, the number of Rosenwald Schools remaining from the 5,357 built between 1917 and 1932 is less than 500.

“Mr. Rosenwald funded over 5,000 African American Schools in the south. The white community had to raise a third of the school cost, as well as the black community, and then Rosenwald would put his money in it,” Ray Rapp said.

Between the years of 1912 and 1932 Rosenwald Schools were built across the south to educate African Americans. The schools were built under a collaboration with Booker T. Washington and Julius Rosenwald, president of Sears-Roebuck. The group’s goal is to make it as close to the original building as possible.

Rapp says preservation of the school is very important because the history of the Rosenwald schools is not very well-known. The goal during the rehab was to make it as close to the original building as possible. Dorothy Rapp, the wife of Ray Rapp, has also been instrumental in the rehabilitation process.

“When we started the project over 10 years ago, the building was falling apart and we had to work really hard to get the original building cleaned up,” said Dorothy Rapp, also a member of the Rosenwald School Rehabilitation Committee.

Dorothy said that it has been a step-by-step process because every Rosenwald school had a standard design.

“There was a plan for all these schools. They have to be facing North and South because it was pre-electricity. When the sun came up you were getting the morning sun, and in the afternoon you would be getting the afternoon sunlight,” Dorothy said.

In addition, the interior had to be a certain color all the way down to the brick of the building. The building had to look at a certain way in order for Rosenwald to fund the school, Dorothy said.

Although the school is closed to the public as of now, the committee is putting everything in place to open it up to the public.

The goal is to keep the school room portion of the school very similar to the original. The second room in the school will be more modern and include technology so school groups can come in,” Dorothy Rapp said.

One of the goals of the rehabilitation committee is to use the building to bring individuals together, as well as bring awareness to all the Rosenwald Schools.

“The Madison County School Board has already had one meeting here so they could see the progress of the school. The plan is for the school board to have one meeting in the Rosenwald school once a year,” Ray Rapp said.

“One of the projects that this group has done is to interview as many people as they have been able to locate, who went to school here,” Ray Rapp said.

Oralene Anderson Grave Simmons was one of the people who went to school in the Mars Hill Anderson Rosenwald School.

“I am so proud to have this plaque. I think we are very deserving of this honor. I am so happy that I will be able to point it out to family members and friends,” Oralene Anderson Grave Simmons said.

“Simmons is the great, great-granddaughter of Joseph Anderson, a slave who was used as collateral for an outstanding debt to build Mars Hill College in Mars Hill, North Carolina in 1856,” Ray Rapp said.

“I am also in the process of writing a book about my life journey, it will be titled, ‘Journey to Myself,’ and it will include my life journey and experiences,” Simmons said.

The launch date is not concrete yet, but Simmons urges individuals to be on the lookout for the book.

Willa Wyatt, the chair of the Friends of the Mars Hill Anderson Rosenwald School, shared more insight into the rehabilitation progress, and points out that the group’s work is not done.

“Reaching out to the next generation of children and grandchildren of those who went to the Rosenwald school in Buncombe County and Asheville to get their input on the school is extremely important,” Wyatt said.

Wyatt said that the committee is looking forward to the PAGE (Partnership for Appalachian Girls’ Education) program, hosted through Duke University, holding one week of their four-week summer session at the Mars Hill Anderson Rosenwald School.

Wyatt is also looking forward to the book about the history of the Mars Hill Anderson Rosenwald school being published in September 1, 2022, as well as a new program called Rhythm and Roots that will begin in February of 2022.

This spring, a major Rosenwald school exhibit has opened at the National Center for Civil and Human Rights in Atlanta, Georgia for individuals to come and learn the history of the schools.

On Sunday, October 2, 2022, the Rosenwald Collaborative and Mars... END_OF_DOCUMENT_TOKEN_TO_BE_REPLACED

Take a trip to the 1920s when Rosenwald Schools were... END_OF_DOCUMENT_TOKEN_TO_BE_REPLACED

Madison County Board of Education Minutes of July 2, 1956... END_OF_DOCUMENT_TOKEN_TO_BE_REPLACED