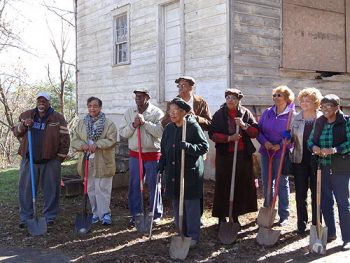 Alumni of the school were present for the groundbreaking.

At first glance, an old boarded up building standing beside a narrow gravel road in the Long Ridge Community of Mars Hill would seem a more likely candidate for demolition than preservation.

With white paint peeling from the wooden siding and one wall almost totally exposed, scrapping rather than saving the roughly 15-by-30-foot framework would seem the sensible choice.

Still, a dedicated group of Madison County residents and former students have banded together to save the structure in order to honor the history of those who studied within its walls. What looks to be just a well-worn building is actually an historic school building — it stands alone in western North Carolina as the only remaining Rosenwald School in the region.

In the first half of the 20th century, more than 5,000 Rosenwald Schools dotted the landscape of the American South, serving as schools, shops, and teacher’s houses built by and for African Americans. Created by a partnership between educator, author, and orator Booker T. Washington and Julius Rosenwald, board member of the era’s retail powerhouse Sears, Roebuck and Company, the Rosenwald Schools helped educate and elevate the socioeconomic status of blacks across the region.

After the 1954 Supreme Court decision Brown v. Board of Education ended school segregation, communities often abandoned Rosenwald Schools. According to survey figures from the National Trust, there may be as few as 15% of the original 5,000 plus surviving today. The Mars Hill Anderson Rosenwald School is among those few.

Omar McClain attended the two-room school for four years in the ’50s. Bused in from Marshall with his brother, he remembers passing other schools he could not attend on his daily ride. “Kids today do not know the challenges we faced to get an education,” he shared at a groundbreaking event on Nov. 13 marking the start of the building’s restoration. “This is a vehicle to help the next generation understand that history.”

Former classmates echo McClain’s story. “It’s something we always knew,” says Oralene Anderson Simmons of the practice of segregation that prevented her from attending the handful of schools she passed on her long ride between Mars Hill and Asheville. “It’s something we accepted. But it did not keep us from having great dignity in this school, our school, and the education we were getting.”

Simmons is the great-great granddaughter of Joe Anderson, namesake of the Mars Hill Rosenwald School. The first African American accepted to Mars Hill University, and the founder of the Martin Luther King Jr. Prayer Breakfast, Simmons believes protecting the school protects an important history. “It is great to see the community come together to save a treasure. By doing so, it allows others to come together and share our memories.” 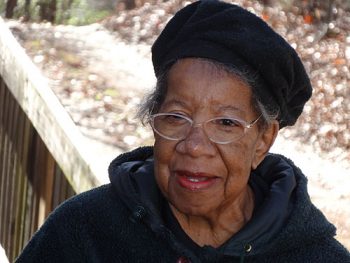 “This is where we started,” remembers Charity Ray. The Mars Hill Rosenwald School alum built a career at the Memorial Library at Mars Hill University and is also a celebrated artist. “Preserving the school allows others to see where we came from and to understand how hard it was to get here. And now, we are here.”

After the school closed in 1964, the space was used as a community center. Slowly, the important history behind the building slipped away and it began to be used as a tobacco barn. Neighbors pushed to demolish the building, built in 1929, to make way for a wider road.

That threat launched the Friends of the Mars Hill Anderson Rosenwald School, a nonprofit dedicated to the school’s preservation, into action. First meeting in the fall of 2009, a collection of alumni and active community members have succeeded in protecting the building and have moved closer toward full rehabilitation of the school as a community cultural center.

The November groundbreaking celebrated a major step forward in the project, with restoration of the building’s shell now underway. Scott Donald of Padgett & Freeman Architects estimates he’s donated over 1,000 hours to the project since former Madison County Schools superintendent David Wyatt alerted him to the school’s needs. Since that time, Padgett has overseen installation of a new roof and removal of asbestos within the school.

“Our firm has done a lot of work for the district and this is definitely a way to give back,” he said of his involvement. “It is so important for this community and for the region to preserve the educational history here.”

Jerry Howard of Mars Hill Hardware will serve as the project’s lead contractor. First on the agenda: the installation of windows to restore the school’s original look. A grant from the Covington Foundation for nearly $25,000 will help pay for the custom-made glass needed to fulfill requirements to ensure the rehabbed school will be listed on the National Register of Historic Places.

“This is a very important project,” Howard confirmed. “This has history important to Mars Hill, Madison County, and our community.”

On Sunday, October 2, 2022, the Rosenwald Collaborative and Mars... END_OF_DOCUMENT_TOKEN_TO_BE_REPLACED

Madison County Board of Education Minutes of July 2, 1956... END_OF_DOCUMENT_TOKEN_TO_BE_REPLACED

This history script is for MHARS Friends Group Review1 1856... END_OF_DOCUMENT_TOKEN_TO_BE_REPLACED