Reprinted from the Urban News, September 2013

On Sept. 1, 2013, the Anderson Rosenwald School Project Planning Committee opened the historic building in Mars Hill for donors, supporters, and alumni to see the progress made so far in restoring the 83-year-old building.

The school was built in 1929-30 using $750 supplied by Sears, Roebuck president Julius Rosenwald, who, starting in the 1910s, donated millions of dollars to build public schools for African American children throughout the South. His grant required matching funds from the state, Madison County, and the Long Ridge Community; the total cost for the school was $2,093. Rosenwald’s funding program ended in 1932, having produced a total of 4,977 new black schools, including nearly 900 in North Carolina; the building in Mars Hill is the only one known to still be standing in Western North Carolina.

The Anderson Rosenwald School served the historically black community of Long Ridge south of Mars Hill proper, as well as all African Americans in the Mars Hill district. It replaced the older Long Ridge Colored School, which had been built in 1905 to replace and consolidate the three “colored schools” in the Grapevine, Mars Hill, and Ivy communities. The 1929 building was a two-teacher school house and served all black students in Madison County up through seventh grade. Those who wished to continue their education were bused to Stephens-Lee High School in Asheville after the 1940s, until integration of all Madison County schools was achieved in 1965. 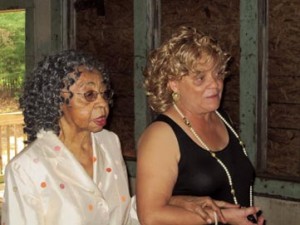 Mrs. Gertrude Bruton, 93, attended Long Ridge School along with other family members; her daughter, Oralene Simmons (r.), attended the Rosenwald School before transferring to Stephens Lee for high school. Both are descendants of Joe Anderson, for whom the school was renamed in 1959.

Among those who attended the Anderson school are Mars Hill artist Charity Ray, who first discovered her love of drawing there, and then continued her education at the old Allen High School for black girls in Asheville; Oralene Graves Simmons, who attended the Anderson School before transferring to and graduating from Stephens-Lee High School; and Dr. David Lloyd Briscoe, who grew up in the Long Ridge community, and, after earning his Ph.D. in Sociology from Southern Illinois University at Carbondale, became Professor of Sociology at the University of Arkansas at Little Rock.

Simmons is the great-great-granddaughter of Joe Anderson, the slave who was held as collateral for a loan that made possible the building of Mars Hill College; in 1961 she became the first African American student admitted to the college. Her grandmother Effie Coone (Anderson’s granddaughter), taught at the Mars Hill Colored School in 1901; her mother, Mrs. Gertrude Bruton, 93, is one of the oldest living alumnae of the earlier Long Ridge Colored School (Mrs. Bruton’s elder sister, now 95, also attended). In her career, Mrs. Simmons worked for Asheville Parks & Recreation and, in 1982, founded the Martin Luther King, Jr. Prayer Breakfast in Asheville.

Another descendant of Anderson is Charlene Ray, a great-great-great-granddaughter, who graduated with honors from Mars Hill College in 1982. She was the first Appalachian Scholar at the school, receiving a full scholarship. For her senior research project, she researched and wrote, History Of Blacks In Madison County now in the Mars Hill University Archives). 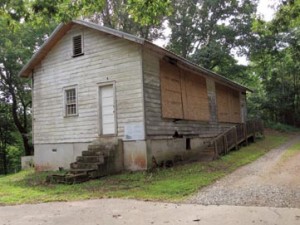 The restoration project began in 2009, after a Long Ridge resident asked that the building be removed to allow for widening of the adjacent road. After integration the school had been used as Recreation Center (and even a basketball court), and later as a burley tobacco air curing barn. When the request to demolish the building was received, Board of Education member Steward Coates, having grown up in the neighborhood, a Board of Education member, suggested it be given to the Long Ridge community for preservation, saving the historic school for posterity.

In the fall of 2009 friends and neighbors organized the Planning Committee to save the school building, and in 2010 the Conservation Trust of North Carolina and the Madison County School Board provided funds to replace the roof of the building. That fall, as part of the Mars Hill College Founders Week, a public gathering was held to celebrate the Long Ridge Community and school building’s planned rehabilitation.

Fundraising and rehabilitation are ongoing.

On Sunday, October 2, 2022, the Rosenwald Collaborative and Mars... END_OF_DOCUMENT_TOKEN_TO_BE_REPLACED

Madison County Board of Education Minutes of July 2, 1956... END_OF_DOCUMENT_TOKEN_TO_BE_REPLACED