The Rosenwald School Building Program has been called the “most influential philanthropic force that came to the aid of Negroes at that time.” It began in 1912 and eventually provided seed grants for the construction of more than 5,300 buildings in 15 states, including schools, shops, and teachers’ houses which were built by and for African Americans. 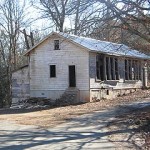 Madison County Board of Education Minutes of July 2, 1956... END_OF_DOCUMENT_TOKEN_TO_BE_REPLACED